Home › Humor › Sidney Poitier…Decision to Bitch Slap Instead of Kissing White Racist May Have Cost Him Oscar and May Have Caused Recent Death Hoax.

Sidney Poitier…Decision to Bitch Slap Instead of Kissing White Racist May Have Cost Him Oscar and May Have Caused Recent Death Hoax. 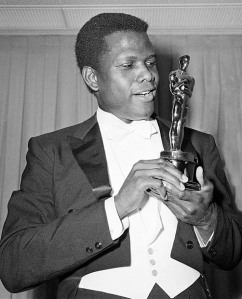 Damn it, had I not watched Sidney Poitier in the movie Lilies of the Field and In the Heat of the Night that was playing on a classic movie cable station on Martin Luther King’s birthday, I would not have to write this. I will be quick and brief and hope this white boy can make it out of this bad neighborhood alive. It is also hysterical that a celebrity death hoax happened earlier this week to Sidney. He is alive, I had nothing to do with the prank and you can’t prove I’m involved except the hoaxer was obviously watching the same thing as I was on the 16th of January that led to the prank five days later.

Lilies of the Field was actually a low budget 1963 movie about a man whose car needs water for the radiator in the Arizona desert and stumbles on a group of poor nuns who pray they can build a chapel on the land they are living for a poor immigrant Mexican population. They believe God sent reluctant Sidney as an answer to their prayers. Other than being called “boy” in the movie by the owner of the town’s construction company, Sidney fights more with the nuns over not wanting to build the chapel than anything to do with his race.

In sixty-three, King was in his fight for equality, segregation was continuing and George Wallace took the oath of office as Governor of Alabama. Later in 1963 the 16th street church bombings would take place, and a President would be assassinated. Our American Society was pulling apart and everyone was holding on to their hats because the sixties were going to be a very bumpy ride, but the movie industry had a black man singing with white nuns to the spiritual “Amen.”

Also don’t forget when this movie was released, Kennedy was the first Catholic President and nun stories seemed to be popular. I actually hated nuns and they didn’t like me either, and as evidence I offer my still swollen knuckles. I always thought they were trying to get to heaven by acting like Saint Ingrid Bergman in The Bells of Saint Mary. Watching what others considered the “cool nun” playing softball in her black habit, rounding 1st base at Jackie Robinson speed, holding the top of her habit so as to not reveal her hair, made this kid rip many a payback fart on the hard wooden pews echoing through the sanctity of the Mass, just to anger those air sniffing nuns who wanted to find the culprit.

I had such a saintly face, but they knew it was me and couldn’t prove it. That’s why they were always quick with the ruler on my knuckles when they had their chance.

Poitier built their chapel with some help of poor Mexicans and the donations of charity from others, including the man who called him “boy” and even offered him a foreman’s job at his company.

Five years later, nun stories were out of vogue and two movies with Poitier starring in them were awarded various Oscars in 1968, but not even a nomination for Poitier.  In The Heat of the Night took best picture against movies such as Bonnie and Clyde, Doctor Dolittle, The Graduate, and Guess Who’s Coming to Dinner. Best Actor went to Rod Steiger, In the Heat of the Night for his role as a southern white sheriff who changes his prejudice against a black man and comes to respect him as they solve a crime together. Paul Newman, in one of his greatest performances in Cool Hand Luke, loses to a Poitier movie again. Best Actress went to Katherine Hepburn in Guess Who’s coming to Dinner. Sidney must have felt like a red-headed step child.

It made me think of a creative decision Poitier made that may have cost him an Oscar nomination. He suggested and got written in the movie In the Heat of the Night a slap scene. He told the director, that when he is slapped by the most bigoted, racist, and wealthiest man in Sparta, who has blacks still picking cotton and a black lawn jockey in front of his mansion in the heart of the South, Poitier suggested he slap him back, because if he didn’t it would make his character appear weak, and so they added it into the movie.

To this day it looks awkward and odd. I’ve never seen bitch slapping between a white and black man. It is the only part of the movie that doesn’t work. Set all that to the turbulence of 1968, King’s murder, Race Riots through the Cities, fist raised at the Olympics by three black men in defiance to America, Viet Nam, and bitch slapping just doesn’t work.

I’m reminded of a very creative response in a book written by Dick Gregory in the sixties called, “Nigger.” In it he is confronted by three Southern racist white men in a restaurant while he is about to eat his chicken dinner. The men walk over to Gregory whose holding a knife and fork in his hand and about to eat and say; “Boy, anything you do to that chicken we are gonna do to you.” At which point Gregory puts down his knife and fork, picks up the chicken and kisses it.

Had Poitier suggested,  after being slapped, that he would grab that bigot and give him a tongue kiss right on the lips, then push him backwards into the lawn jockey…..he would have received a nomination and a Best Actor Oscar.

I also thought, had those nuns just kissed me instead of whacking my knuckles, there would have been silence and the smell of just holy candles during the Mass.