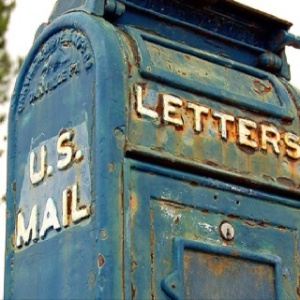 My Uncle was a bigwig in the Post Office and he would get me and my friends, part-time, eighty-nine day job appointments. The hourly wage was great for summers between college courses, or laying around till something more permanent would come along.  One time, I was assigned to a massive facility in Virginia, just outside of Washington D.C., which sorted the mail and moved it closer to its destination. A dreaded night job that I would clock out at four in the morning.

Under florescent lights, time stood still, but you knew it was moving because of the sounds of long belts of machines moving letters, bulk advertising pulp, packages, then put in plastic gray trays and picked up by the sorters down the line. A hum heard in your mind for hours after work. I knew at eighteen the causes and meaning of “going postal.”

I saw married couples sitting next to each other in front of hundreds of small, individually marked square boxes inside a big box. Sitting for hours, moving their arms and their hand holding a piece of mail and throwing it into the proper zip code box; Like expert bingo players playing thirty cards at the same time, moving their marker and checking off B29 before the next number is called. This went on for nine hours, with two fifteen minutes breaks in the shift and a half hour lunch.

They sat close to each other, but these married couples were extensions of the machine and seemed to have a personal pact to rely on each other through this insanity. Of course there were plenty of individual employees like me who did the shift alone. Never any conversations of life around the water cooler or personal interaction. Just keep moving like the automated machines that had replaced other workers years ago and would continue to replace them in the future.

Only the thirty to forty year olds, college educated supervisors were separated from these machines and human underlings. Suit wearing male and females, they always walked around together, mostly with their arms folded, touching nothing, and looking over the masses and whispering to each other.  Young government bureaucrats, and very self-important. What great insight could they possibly be sharing? Perhaps changing the trays from plastic to cardboard to benefit the environment?

Something was up. They scrambled across the floor going to every employee with a piece of paper with a name on it. A Senator needed to have a letter intercepted before delivery. I couldn’t stop laughing at the arrogance of some politician trying to stop the machine to cover up some blunder, or secret sex-capade, but only god knew why.

Of the hundreds of thousands of letters moving through there that night, this one letter could or would be stopped from being delivered seemed hard to believe.

I kept thinking of their motto, through rain, sleet, snow, war, whatever, the mail would be delivered, except if you were big enough in the government, you can stop a letter from being delivered. It was confusing the Post Office Motto. These chump suits wanted that letter badly. Visions of a sugar-plum promotion must have danced in their minds. All they had to go on was the name and address on the envelope. The collective machine kept their arms and hands moving, the belts kept rolling the gray trays, and I didn’t care and worked at a snail’s pace. I knew I wasn’t going to last three days here and would rather go hungry then insane.

I pulled a bundle from my tray and started to throw mail in the square slots. There it was in my hand. The woman’s name and the envelope the suits wanted. The Holy Grail of everything arrogant, and impersonal about Washington D.C., the Post Office, the supervising suits, the machines, and the collective numbness around me. I put the envelope in front of me and kept throwing some pieces in the slots as to not attract attention. I saw the handwritten, return address name of the Senator…the suits never told us his name but only the addressee. I made my mental note. I wanted to rip it open, but knew I would get a few years in jail.

I could have stood up and given it to one of the suits, and that person would have run off to their promotion or back-slap.  Instead, I sent it on to be delivered like any good worker of the collective would do. I stood up, walked out with no intention of returning. I met the refreshing night air with that machine hum still playing in my brain. I drove past Washington D.C. and all the cold-pastoral monuments, looking over at the Capitol Dome and wondering if that Senator was still in his office.