Home › Political Satire › America Has Been Transformed Into A Pollock Painting

America Has Been Transformed Into A Pollock Painting 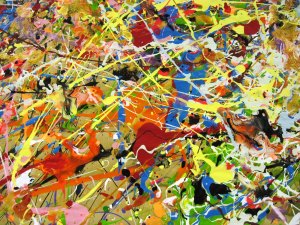 America has been transformed into a Jackson Pollock painting.

Never thought that President Obama meant for this to happen when he said he was going to transform America. It was the “HOPE” or “CHANGE” poster showing his likeness as the transformational picture of America.

That poster, according to an art critic was done in the style of social realism, not to be confused with socialist realism.

Socialist realism is a style of realistic art that was developed in the Soviet Union under Stalin and became the dominant style in other socialist countries. The style has a purpose and that is the furtherance of the goals of socialism and communism.

Social realism made an immediate icon of this politician.

Pollock, an artist known for throwing liquid paint on a canvass that looked like a chaos of colors, came to prominence after World War 2, and into the Cold War era in America.

The Congress for Cultural Freedom, an organization to promote American culture and values, backed by the CIA sponsored exhibitions of Pollock’s work.

According to some internet research, Eva Cockcroft and other left-wing professors said the U.S. government and the wealthy elite embraced Pollock and abstract expressionism in order to place the United States in the forefront of global art and devalue “socialist realism.”

Cockcroft wrote that Pollock became a “weapon of the Cold War.”

Time in the presidency has faded the colors to grey on President Obama’s hair, and the “HOPE” or “CHANGE” posters have been donated to the Smithsonian.

Obama has achieved membership in the wealthy elite.

The rest of America is left looking at a Jackson Pollock painting.