I take my seat at the bar in the only upscale restaurant located in the historic district of this small, southern town to have my dinner. When I leave, I will be handcuffed by the local police because of Pat Boone’s white bucks.

For the most part I’m a polite man who minds his own business. I am friendly to Erna the bartender. She told me the chef’s specials, and for an appetizer I ordered the steamed clams in lemon and butter. As I was enjoying them, the bar began filling up with couples having a glass of wine before being seated at their tables they have reserved. I seem to be the only one eating alone and I might say, I may be enjoying myself more than some of the men dragged out by their wives that night, but not more than those who are happy to be on a date with their companions.

When my rare, Angus beef tenderloin is served one of those not so attentive to his wife is sitting down next to me before their table is ready. I happen to find it rude that as I take my first bite, he loudly brings attention to me and my dinner.

“How the hell is that steak?” He says and slaps me hard on my back.

I nod my head to suggest the food is fine.

The entire bar is looking at me chewing, however this man seems to be making a lip smacking noise to go with my mastication. Not only do I find him rude but a bully. For some reason this man feels that because I’m alone eating my dinner, he thinks I am a goat to be served for his dinner.

The bar is quiet but I feel their eyes looking at me and what is becoming an embarrassing and uncomfortable situation.

Perhaps I can end this; “I nodded to you that it was good. I am not a food critic.”

“I just wanted to know about your steak;” he says and puts his hand on my back.

I put my fork down and turn towards him. “If I was eating with a date, I am sure you would not come to my table and ask me for a review of my food. Why don’t you pay attention to the lady you are with and let me enjoy my dinner.”

Obviously the owner had noticed what this man was doing and at that moment came to tell him their table was ready and to follow him. I continue facing him as he is getting up from the barstool and he intentionally pulls back the lower part of his suit jacket to reveal his holstered gun. I make sure he notices it does not disturb me, because this is a “conceal carry” state, and for all he knows I may have a gun as well.

The bar resumes normal activity and I finish my meal with a cappuccino.

The owner comes over and apologizes for the incident and I leave. I am standing between the tiki torches on their porch lighting a cigarette and begin walking to my car. A short Hispanic male teenager holding a shoe box approaches me, asking if I wanted to buy something very rare. He says he is going to Kentucky to his uncle’s home and lost his job in Southern Florida. He was working a temporary job at the home kitchen and bath convention.

Not sure what I am about to see but I got to know what’s in the box.

He opens the shoebox like he is about to show me a pound of cocaine. It is a pair of white bucks, and he quickly closes the lid and says; “One-hundred and fifty dollars.”

I’m really curious and laughing. “That’s a lot for a pair of white bucks.”

“These are no ordinary shoes Sir, they belong to Mr. Pat Boone.” 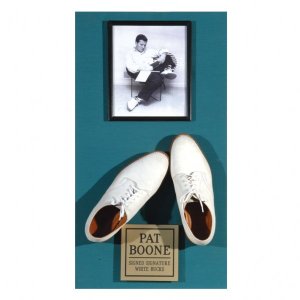 “Pat Boone, the guy who sang April Love in the late fifties?”

“Don’t know what you talking about Sir, but they belong to the inventor of the Step-In Bathtub.”

“He didn’t invent that, he’s just the sales’ guy, the pitchman to the elderly women who once swooned over him when he sang April Love.”

“I’ll tell you something else Sir, do you know Mr. Pat Boone does not have a step-in tub?”

“I believe that, he’s wealthy enough to have someone lift him into the tub.”

“Sir, my friend who works for him told me he drinks Jim Beam and milk before he goes to bed.”

“Yes Sir, and Mr. Pat Boone gave me these white bucks at the bathroom convention yesterday. Look at the personalized tag inside the shoe and his autograph.”

He continues to explain that he will do better with his family in Lexington Kentucky near Keeneland Racetrack. They work with racehorses and he wants to be a jockey and one day ride in the Kentucky Derby. He had been hitchhiking this far but needs some money to take a bus and stay out of the winter cold.

He lifts open the box and points out the tag that says; “Specially Made For Pat Boone.”

I don’t doubt this kid. He just might make a great jockey someday. We exchanged our names and I told him my interest in horse racing. Talked about my two favorite horses, Seabiscuit and Secretariat.

I gave him fifty dollars, told him I didn’t want the shoes and just as I was saying good luck, two cop cars with flashing lights came from different directions and surrounded us. Their guns were drawn and issuing orders to get on the ground. I look over and see the rude man coming out the front door of the restaurant with his gun drawn holding up his police badge.

I didn’t realize the rude man was looking out the window at me from his table and was on his cell phone calling his fellow policemen. I never thought this bully was a cop, but he called in that a possible drug deal was taking place.

I’m being cuffed on the ground, being lifted to my feet and told it is for my own protection. So is the kid and he is very frightened. A cop picks up the shoebox and opens it. A few people from inside the restaurant are now on the porch in the glow of the tiki torches watching and guns are quickly put back into their holsters.

He lifts up a shoe and says; “It’s a pair of white bucks.”

I say; “Good job Sherlock, this town will be safe tonight.”

The cuffs are being removed from both of our wrists.

I hear the rude cop telling one of the officers the shoes may have been stolen. Even the other officers are shaking their heads. One comes over to question me and I proceed to tell the story and about the behavior and nervous breakdown one of their own is having. I said those shoes are not stolen and the kid is just trying to get some extra money for bus fare to Kentucky. The owner of the restaurant is interviewed and how these events came to be.

A Sargent who had arrived on the scene brings over the rude cop who apologizes and expresses regret for the situation. I told him the only thing that will make me feel better is for them to put this kid on a bus to Lexington Kentucky. The Sargent gave me his word that will happen. We shook hands.

When the kid finds out he’s getting put on a bus to Kentucky he comes over to me and thanks me and wants me to take Pat Boone’s white bucks. I made the kid keep them and I told him to take any mount named “White Bucks” and to send me the boots he wears when he wins the Kentucky Derby. He hugged me and jumped into the Sargent’s cruiser.

Life is full of coincidences and seemly insignificant events. For some reason, I think we were all there, even the rude cop, for that kid’s future glory across the finish line.

Like Loading...
‹ A Year Ago, Merry Citrus, ….Glad To Be Back In Annapolis.
Noir in a Small, Southern, Florida Town ›